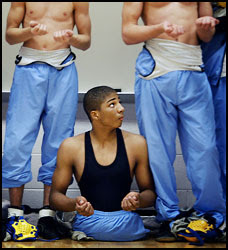 A high-school wrestler in the Washington area has attained an 8-7 record without the use of legs, because he has none.

One potential advantage for Trevon Jenifer, and one that may cause some to question the propriety of his wrestling, is that he has the upper body of a 180-pounder, but weighs in under the 103-pound lowest weight class, so he has generally more arm and torso strength than his opponents. William