Something may or may not happen/have happened on Jeopardy! today.

Also, the Sports Guy reviews some TV. Haven't finished it, but it'll probably be good. William

You might have missed it with all the commotion over the weekend, but there was quite a brouhaha in the South Carolina / Clemson game on Saturday. Can you guess the coaches' and players' excuse for the fight?

"You saw it at the basketball game last night," Clemson quarterback Charlie Whitehurst said, referring to the brawl between the Detroit Pistons and Indiana Pacers. "You hate that it happens, but it does sometime."

Clemson running back Yusef Kelly said the brawl doesn't compare with Friday night's melee at the Pistons-Pacers game. "It's no worse than the Pacers and Pistons last night. They actually got the fans involved. At least we kept it to the football teams," he said.

I'm sorry guys, but the "I saw it on t.v." one hasn't worked since that kid got lost in the sewers pretending to be the Teenage Mutant Ninja Turtles. And, uh "sometimes it happens" usually doesn't work in a court of law. Also, a tip from me to you, saying that you're no worse than Ron Artest isn't going to get you very far in life.

On a side note, check out this player's opinion of SC coach Lou Holtz's retirement and upcoming replacement by Steve Spurrier:

This officially marks the ONLY time in history that anyone has compared Lou Holtz to J-Lo. You saw it here first. ben

So tragic and yet so preventable. This is what can happen when you let hunters use semi-automatics: five killed in a shootout over who gets to occupy a hunting platform in northern Wisconsin. People kill people, of course, but so, too, do guns. I hate to link to this, but when one drives through Central IL, my native land, you occasionally pass a cornfield with a series of cheesy rhyming signs promoting a group called Guns Save Life that make the hairs on my neck bristle. I just can't understand why people continue to think that we live in an age where it matters that our forefathers used rifles to win freedom. We have freedom now. We are no longer vigilantes looking out only for ourselves. We are civilized, or so I'd like to think. William

So, Ron Artest has been suspended for the entire season thanks to his role in a player-fan melee. Was the punishment severe enough? Too severe? He did a very bad thing, to be sure. Players entering the stands and throwing haymakers isn't too cool. (Though neither is pelting players with food and ice and beer.) Artest is a notorious head case, who can't seem to control his emotions, which is sometimes a good thing on the court. His past suspensions may have caused NBA commish David Stern to give him more of a punishment than usual. (And maybe not enough of one, according to Michael Wilbon.)

But this seems like the classic parenting dilemma. Do you keep punishing a child with increased levels of punishment until they come around to it? This runs the risk of the child giving up and rebelling completely. Or do you try to nurture and bring them around without so much threat and force? This runs the risk of the child taking advantage of the parent. In any event, my guess is that it's a little of both, and the NBA should send Artest to counseling so that he's not stewing at home alone for the rest of the season. William 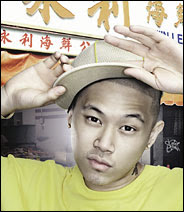 Today, two of the most widely read newspapers in the country are featuring long, glowing profiles of an Asian rapper named Jin.

Here's the piece from the New York Times (magazine) and here's the one from the Washington Post (note painful titular pun).

Jin hit it big over two years ago on BET's 106th & Park, winning the "Freestyle Friday" rap battle seven weeks in a row and getting signed to the Ruff Ryders label. In October, after many delays, he finally released his album to anemic sales despite the hired help of some of the rap world's top producers.

So why did both papers come out with a profile of him on the same day? The stories are nearly identical, using all the same facts, similar quotes, and emphasizing the same obvious theme: Hey, check it out, an Asian rapper!

Newsweek beat them to this story by two weeks, and the NY Daily News (note similar awful titular pun) had this story on October 17! Even the squares at NPR did a feature on him a month ago!

Here's my theory on how an all-but-forgotten novelty act made a leap to the top of the publicity pyramid: Jin's album debuted in the middle of October, and while sales were okay for the first week (#54 on billboard), they fell off precipitously. So someone at the Ruff Ryders label decided to stir up some publicity from the "mainstream" media and hooked a couple of sucker reporters.

It's a tried and true method of getting big kiss-assy profiles when performers release albums, but nonetheless, it's embarassing when both papers have the same lame outdated story. I haven't heard Jin rap, and some reviews have been positive, but unless Times and Post readers start buying the album, it's headed straight for the discount bin. ben

Remember the girls of the Madison Club? The WashPost recounts their rise and fall (and rise again?) with slight relish and lessons to be learned for future arrivistes on the Washington scene. William

Says a representative of DADA footwear, "Because of the pricing, anyone can own a pair of spinning rims. They may not be on your car, but you can still have the look." Um, yeah. (Thanks for the link, Spratt!) ben 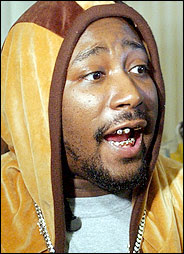 Big props to the stuffy New York Times for giving Ol' Dirty Bastard his due, in the form of two articles in two days.

ODB will be missed sorely by the other members of the Wu-Tang who have seen him spiral out of control while they have gone on to bigger successes (particularly Method Man, I suppose the others haven't hit it big quite like he has). Someone today asked me what ODB's contribution to rap was (with me being the rap expert in the econ department, which is sad on numerous levels). The best I could come up with were 1) his contributions to the badass creative image of the Wu-Tang and the contrasting styles of their group (which I believe held more diverse ideas simultaneously than any other group ever), and 2) that his textured voice and certain brand of insanity, not unlike Biz Markie when you think about it, paved the way for Mystikal, Ja Rule, and DMX. (But is this necessarily a good thing? I digress.) Dirt McGirt, Big Baby Jesus, Osiris, Russell Jones, Ol' Dirty, we'll miss you. All of you. ben

eBay is allowing a Florida woman to sell a 10-year-old grilled cheese sandwich that she says bears the image of the Virgin Mary. To me, it looks a little like Marlene Dietrich or Greta Garbo or Madonna in her Vogue video. Hmm... maybe she got her Madonnas confused.

What I find funnier is that the attention the grilled cheese has gotten has prompted other eBay sellers to put the words "grilled cheese" in their listings in hopes of attracting more buyers. William

So, exactly how many children did Ol' Dirty Bastard have? His wife thought three--just the ones she had with him. His manager said seven, which meant four out of wedlock. Some reports said as high as 13, but they seem to be bunk. Seven is the number of childrens' shares his estate will be split, so we're going with seven. He named one Allah and another God Ason. Is that like "Got a son"? or "God, a son," i.e. "Son of God," i.e. Christ? But I do like Osiris. William

Re: Re: Fwd looking

Hank Stuever has a great piece about the post-election Democratic e-mail forward culture. Kerry supporters have been bombarded with Michael Moore's words of wisdom, pictures of Americans who are sorry and conspiracy theories about voting machines. They often come with the magic words: Thought you'd all like to see this.

And a note to our readers... sorry for the sparse posts of late... it's been hectic here at Snap Culture HQ. We'll be back to normal soon! William

We here at Snap Culture are sorry about not posting much these last few days. But with this whole election thing wrapped up, here are some leftovers from the last few days that are worth checking out:

* What the hell happened in Ohio? And where do the Dems go from here?

* The Daily Show's Election Day Blog. Quite funny in parts.

* Not satisfied with Jon Stewart's appearance, "Crossfire" had Triumph the Insult Comic Dog on their show recently.

* The Post's Gene Weingarten pens two of the best things I've read in a while--a profile of a non-voter and an op-ed about voting that is possibly the most touching thing I've read in a long time. He discusses the two articles here and here, respectively.

* Finally did you see the photo below? Is that symbolic of the state of our country? Yikes! 20 injured.