What's it like to work in Best Buy during the holidays? You answer 250 questions in two days, among other things.

tinfoiling my copies of Catcher in the Rye...

I've been saying it for weeks, but something didn't add up for me about the election. With all of the voter registration drives in places like Ohio and Florida, especially by Democratic groups, how is it that the Dems were outnumbered at the polls? Leave it to the Votergate Resource Center to provide "20 Facts You Should Know" about the election.

The scariest combination of three facts:
80% of all votes are counted by two companies, the leadership of the two companies are brothers, and one wrote President Bush saying he was "committed to helping Ohio deliver its electoral votes".

As far as I'm concerned, this isn't conspiracy theory anymore. Something far more serious is wrong here. People need to be yelling on the street corners about this. Read the links and form your own opinions, then get angry.

(Thanks for the link, John!) ben

Liberals kill innocents, take it up the butt

State Rep. Cynthia Davis of Missouri re. the push by state-level Christian-political groups since the election (cf. Abortion means the terrorists win):

Catholic League President William Donahue on 'Scarborough County', discussing why 'Passion of the Christ' will not win an Oscar, I guess:

Ernest B. Murphy, a superior court judge in Massachusetts, has filed a lawsuit against the Boston Herald for a "malicious and relentless campaign of libel unprecedented in the history of this Commonwealth." The initial story called Murphy's conduct toward victims in his courtroom "heartlessly demean[ing]" and alleged that he said a 14-year-old rape victim should "get over it." Murphy contends he said no such thing.

With the rise in reporter-cum-talking heads filling up the hours on cable news networks with plenty of airtime to spare, the story had legs beyond the pages of the Herald, and especially on Fox News. Reporter Dave Wedge's said with certainty on "The O'Reilly Factor" that Murphy made the statement to three lawyers, but in statements under oath repeatedly answered that he didn't know or didn't recall answers to questions about his reporting.

Some think the outcome of this case will reduce the roles reporters play on TV shoutfest programs, but I'm not so sure. Newspapers and reporters might be a little more careful with TV, but it's a seductive medium for the reporters and good publicity for the newspapers. William

EA Sports signed an exclusive rights deal with the NFL for the Madden franchise to become the only video football game with NFL logos and players. This is a huge blow for competition like ESPN Football, which actually made inroads this year by offering a good game at less than half the price ($49.95 for Madden, $19.95 for ESPN). EA must have felt a little pocketbook sting, so it went out and eliminated the competition.

Madden is a great game, but competition is always healthy and keeps Madden developers on their toes to keep innovating. Shame on you, NFL. William

So Old Faithful had a stroke a few weeks ago, and now he won't be host for his 32-year-long annual gig watching the ball drop in Times Square. Regis Philbin will substitute. Now, honestly, the most shocking thing about the story is Clark's age. He's 75. Not young, but not ancient, either. It's often commented about how young he looks for his age, and he does, but they lead you to believe he's 93 or something. William

Hey cowboy, what are you hunting?

If the Kobe / Shaq argument has been waning over the last few weeks, the Kobe / Karl feud is just heating up. Apparently Malone hit on Kobe's wife. Although my take on the conversation is that Vanessa Bryant started it with the question posed in the title of the post. Karl's response "I'm hunting for little Mexican girls" seems like the only appropriate answer to that question if you ask me.

Malone says he didn't mean anything by it. But Kobe won't accept that apology, saying that it wasn't a misunderstanding. All this after Karl said he wouldn't return to the Lakers because Kobe said he didn't think he would return, whatever that was all about. Maybe it was about the supposed pass at his wife. The NBA, it's FANNNNN-tastic! ben 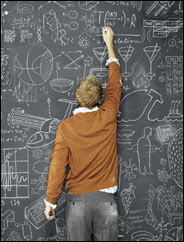 The New York Times Magazine has its annual "Year in Ideas" issue today, and it's full of interesting vignettes from around the intellectual sphere. Among the more intriguing:

I haven't seen him in action enough to have much of an opinion one way or another, but I really like this profile of Philadelphia Inquirer columnist and ESPN basketball commentator Stephen A. Smith. There is something to be said for writers and commentators who really do understand the athlete's perspective, and Smith seems to be more in touch than Michael Jordan pal Ahmad Rashad ever has been. William

How about the job of being Barry Bonds' publicist? What a nightmare that job has to be right now. Did you even know he had one? For 15 years? I'm sure she prompted him for the priceless quotes, "Can't I just be good?" and "Dude, whatever" in response to questions about steroid use.

Major League Baseball has decided not to pursue corporate sponsorship of Bonds' quest for homer 756...and I don't blame them. He's going to hear a lot of boo-birds this season.

We fans demand an awkward balance with our professional athletes. On the one hand, we want them to be just like us, coming from humble backgrounds and hitting it big after enough perserverance and practice (think Jordan getting cut from his HS b-ball team). This myth fosters the idea that anyone could make it big in sports, even without the great genetics of a 6'6 man with a 42 inch vertical leap. On the other hand, we want to see superhuman feats of skill, as nothing less with impress us anymore. We want 500 foot home runs, dunks from the top of the three-point line, 100-yard dashes in 8 seconds, and we always want the next generation to be better than the last. As the media scrutiny of athletes has intensified, a.k.a the ESPNization of sport, these two constrasting demands tug in opposite directions. I think the tension has reached a new level with the steroid controversy. ben

No, thank YOU for your support

Here's a great list for the holiday season from DonkeyRising:

With the holidays upon us, some of us might wish to be mindful of who we patronize relative to their Election Cycle political donations, as reported by the Center for Responsive Politics.

Looks like it's going to be wine coolers for me from here on out. I hope you get the title reference... ben

Not much time to post, but several interesting things caught my eye.

So Barry Bonds has been juicing up. All signs were pointing in that direction with big flashing arrows. What does this do for his legacy, and for his potential final home run total of 756+?

Sam Smith, the Chicago Tribune/ESPN scribe and chronicler of Michael Jordan's days in "The Jordan Rules," writes a long piece, somewhat behind-the-scenes, about how the Bulls dynasty unraveled, including several moves they could have made or made too prematurely. How about a starting five of Tracy McGrady, Elton Brand, Brad Miller, Ron Artest and Jamal Crawford? Think that team could be competitive? Nevertheless, the Bulls are still profitable, according to Darren Rovell, who I think is one of the underrated reporters on ESPN's roster.

Finally, the sad outsourcing story of the Schwinn bicycle. It's now made in China and shipped to Wal-Marts. Remember when a brand-new Schwinn was the ultimate prize on kiddie gameshows like "I'm Telling" and "Finders Keepers"? William

What's the hottest thing to pick up this holiday season? How about an inflatable, 6-foot-high SpongeBob SquarePants from atop your local Burger King? A couple hooligans with nothing better to do thought it'd be a great idea to make off with SpongeBob because, well, who will notice a big, inflatable, waving sponge missing? Um, well, maybe the Burger King employees.

Turns out, though, that this isn't the first time it's happened with SpongeBob. BK is reporting similar thefts across the country. What I love about this story, though, is how excited the thieves were to relay their tale, even after being arrested and posting bond.

Oh, and something did happen yesterday. Spoilers were right. That was some run. William

'roids across the pond

Think the performance-enhancing scandals in baseball are bad? It's gotten so out of control in Italian soccer that Cardinal Fiorenzo Angelini at the Vatican wants answers. Who knew that the players at Juventus of Turin (one of the best soccer teams in the world) were taking drugs like EPO? Note that creatine is a legal substance in Italy, and has been such a force in the game that one of the most prominent coaches said that "Italian football needed to get out of the pharmacy."

Get out the tape-measures and measure those craniums! Of course nothing will happen to any of the players on those championship teams, although one of the team doctors has been sentenced to 22 months in prison. More on this story as it develops, it's probably a preview of what will happen with the BALCO / Barry Bonds case here. A slap on the wrist to the people who have benefitted the most. ben