No Soup For You!

The most tragic thing about former child actors is that we still have to pretend like we care about what they're doing now when all we really want to do is ask about the t.v. shows they were on. It's a cruel, cruel world for these filthy rich semi-celebrities, trapped in the past. (Thanks, Meghan!) ben

Sounds like some UCLA researchers have achieved nuclear fusion. The bad news is that it's very small, but it's a start.

Note the attempt to make nuclear fusion "policy relevant", by claiming that it could have potential uses in oil drilling and homeland security. Yeah, great, get some more government funds and use fusion to screen luggage. Fuck that, use fusion to solve the world's energy problems! Come on, dream big, fusion researchers!

Also, note the biggest upside to their study, in contrast with some earlier efforts of two British researchers:

Fusion experts noted that the UCLA experiment was credible because, unlike the 1989 work, it did not violate basic principles of physics.

I'm no physicist, but I think that's a step in the right direction, I hate it when experiments defy basic laws of thermodynamics. ben

tears of the clown

With any article about mobsters, I first look for two things:

1) Proximity to my hometown of Oak Park: Elmwood Park borders it, and Melrose Park is one town removed. Surprisingly, no mention of neighboring River Forest, which is where many of the big-time mobsters have/had their suburban retreats (e.g. Tony "Big Tuna" Accardo). The closest I have to an Oak Park connection here is that a guy I went to high school with was rumored to be the son of Tony "The Ant" Spilotro, who Joe Pesci's character was based on in Casino, but I have no idea if it's true or not.

2) Nicknames, nicknames, nicknames. "The Clown" is a fantastic mobster nickname. "Hambone", "The German", and "The Indian" are pretty damn good, but I wouldn't want "The Ant", or, even worse, "Twan". I'm not sure if that's what it's referring to, but it reminds me too much of the classic Ice Cube lyric that started with "Used to be the Don Juan"... ben

Putting the "sin" in "cousin" 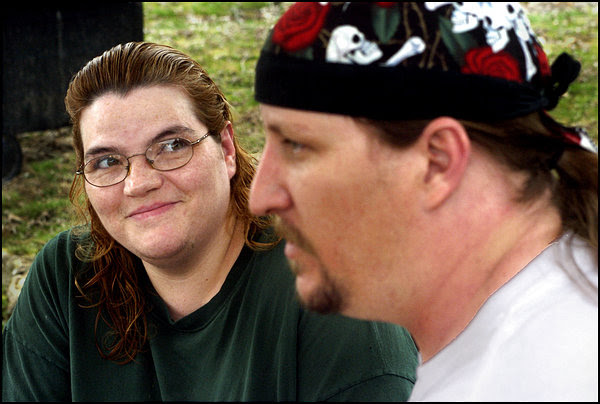 A Pensylvania couple seeks acceptance for their union. Husband and wife also happen to be cousins. What would Rick Santorum say about his own constituents?

Evidently there are also websites for "kissing cousin" devotees. The official term is "consanguineous marriage," and birth defects are twice as likely in offspring of these marriages than for those between unrelated partners. The Pennsylvania couple, however, says they have no intention of having children. But they will not be alone. They have several animals, including two guinea pigs named Beavis and Butt-Head.

One has to admit, though, that the story's author does a good job of not judging them too much. William

Give it the Axe

This story is both hilarious and troubling. Young males wanting to feel like men are using the deodorant Axe to spray all over their bodies, giving them a very pungent smell, "vaguely sweaty, somewhat powdery and reminiscent of the aroma that wafted off your grandmother's dressing table."

Why do young people want to grow up so fast? And why, in the process of doing so, do they make such silly choices? William

paying for the weather?

Talking Points Memo on the latest bill proposed by Senator Santorum to stop the National Weather Service from providing its forecasts for free. Because Santorum gets money from the Weather Channel, which wants to make money off of the weather. Disgusting.

From now on, I'm only getting my weather here. No ads, tons of maps and details, and it's Santorum-free. Now if only the forecast didn't include another inch of snow in Ann Arbor, I'd pay for that... ben

A woman in Virginia who served on a murder trial jury might face fines and costs of more then $25,000 after she was caught purchasing 74 cents' worth of newspapers, a violation of an order from the judge not to read or watch news coverage of the trial. The judge threw out the conviction for murder because of the juror's misdeeds. William

`85 Bears: Appearing at your corporate event or Ben's birthday party...

...if the price is right and you rent at least three former players.

Beloved championship teams from the past are incorporating in order to sell autographs, memorabilia, etc. With the 20th anniversary of the Bears' Super Bowl victory engendering all kinds of nostalgia next season while the current product flops in the NFC North in the face of the mighty Packers, the team has organized itself into a promotional collective. Pretty good deal if you were a backup tight end who spent the entire `85 season on injured reserve, and you can still cash in with public appearances at golf outings and such. William

What an amazing story, largely suppressed by the big media outlets: Falcons QB Michael Vick has been charged in a civil suit with giving a woman he was dating herpes. And that he has, on at least one occasion, used the pseudonym "Ron Mexico". Needless to say, the real, herpes-free Ron Mexico isn't too thrilled about the media attention.

What was the NFL's response? They've block purchases of Atlanta jerseys on their website that say MEXICO on the back.

And of course, it only took a couple of days before RonMexico.com opened, with a full line of related t-shirts, and links to getting free condoms over the internet. It's become the one-stop clearinghouse of Ron Mexico-related news.

Also, I started this post with a dirty James Taylor verse (see the title), but I changed it, you know, for all the kids out there who read SnapCulture. Also, jokes referring to the "Michael Vick Experience" Nike ad campaign have been purged. But you can guess what they were like. Of course, Vick is innocent until proven guilty, but he hasn't been quick to deny the accusation. More on this as it develops. ben

damn, I was close

I said it was only a matter of time until they made "Billy Madison" the musical in my post a couple days ago. Well, I was wrong. It turns out instead it's going to be The Wedding Singer, the musical.

I can't believe 2 things, first, that I predicted this five days ago, and second, that there still isn't a James Brown musical. ben

She's not a girl, but she could have one

Britney is pregnant. This makes baby #3 for the 27-year-old Federline. The question is: why would 23-year-old Spears want a child so soon? That is soooooo Louisiana. William

Or at least as much as he can. Ted "Double Duty" Radcliffe is 102 years old, and still going to ballgames. William

On Bush's iPod? John Fogerty, Van Morrison, and a lot of country. Oh, and "My Sharona" by the Knack. William

From the New York Times, in their article about how young straight white men are flocking to see Spamalot, the Monty Python musical on broadway:

"If I were of frat boy age and I had $100, would I opt for a Broadway ticket or would I want to spend that on booze and drugs?" Mr. Fierstein asked. "Even I, and I am as gay as a pink leather piñata, would choose booze and drugs."

The quote is from Harvey Fierstein, who wrote the book for "La Cage Aux Folles". Apparently the demographics for Spamalot attendees is causing quite a stir on Broadway. Expect "There's something about Mary" and "Billy Madison" to be musicals in no time (note: both movies did in fact have some singing).

Also, and this deserves it's own post, if anyone knows anyone who has some money to put up for a Broadway show, tell them to email me. Here it is: "I Feel Good!" the musical based on the music of James Brown. There are musicals out there for the music of Billy Joel, the Beach Boys, ABBA, and a bunch of others, but none of these musicians are as catchy as the GFOS, nor does their music span the full oevre so perfectly for the trajectory of a three-act play.

Whoever steals this idea from me owes me a crapload of money. ben

In Brit we trust

I will so be watching this: a reality show about pop star Britney Spears and layabout Kevin Federline. I shouldn't be surprised that they wanted to do this, but nevertheless I am. I didn't know they could take their trashiness to this level.

A great line: Federline, a former backup dancer before becoming Mr. Britney Spears, and a man of few words -- seriously -- said, "It is a documentation of love."
William

You are who you pick, apparently. ben

One of the best April Fool's pranks ever was pulled off by George Plimpton in Sports Illustrated. 20 years ago yesterday, Plimpton wrote an article about a pitching prospect for the Mets named Sidd Finch, who could throw a baseball 168 miles per hour. The New York Times recounts the tall tale and the man who posed as the pitcher for the photos, who was an art teacher at my town's other middle school. A classic story that only someone with Plimpton's gravitas could have pulled off. The guy who posed for the pictures still gets stopped on the street because of it. ben